Learn about the lore of February 29th with Berrier insurance, commercial truck insurance specialists. With 2012 comes the gift of an extra day: 24 hours for our calendar to catch up with the sun—and for us to catch up on DVR recordings. This is because a year isn't really 365 days, in fact our planet actually takes 365 1/4 days to revolve around the sun. These six additional hours each year add up to an extra 24 hours over four years, at which point we add a day to our calendar. Without leap day, annual events would slowly shift seasons—eventually, we'd be celebrating Christmas in July. However the system still isnt perfect. While the calculation of 365 1/4 days for the Earth to lap the sun is close, the true figure is actually about 11 minutes short of that, and this tiny miscalculation caused a day of discrepancy every 128 years. In 1582, it was ruled that leap year would be skipped three times every four centuries to fix the snag. While Feb. 29 may feel like your average day, its once-every-four-years status has long linked it to myth and lore. 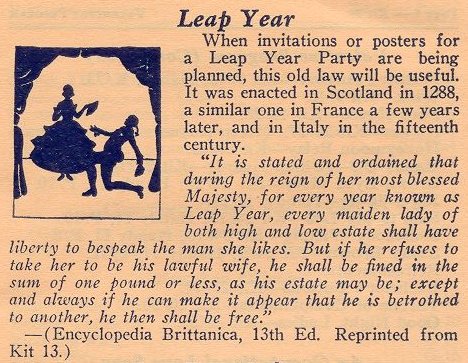