Berrier Insurance, commercial truck insurance specialists, reports on more requirements being imposed upon the trucking industry.  It seems that regardless of how new a rig is the government continues to want the latest and greatest technology added despite costs to owners. Should the NHTSA allow either system to be installed?

The National Highway Traffic Safety Administration (NHTSA) is proposing a safety standard that requires all commercial trucks and buses be upgraded with electronic stability control (ESC).  This new rule is the first of its kind and is targeted at all vehicles with a gross weight of more than 26,000 pounds.

It is anticipated that this new rule would go into effect as early as two years after legislation is signed.  That would mean that, in addition to new regulations already requiring upgrades, owners/operators may be looking at additional expenses and/or return visits to the shop in order to meet these new standards.  Additionally, the proposal for the new standards includes the addition of performance testing the new technology.  Many truck manufacturers are currently installing this additional piece of equipment on new rigs; however, there are actually two types in use and the choice between systems has yet to be decided:
University of Michigan Transportation Institute study of 5-axle tractor trailers is swaying many toward the ESC.  It was found that the RSC resulted in 3,489 fewer crashes and 106 fewer deaths than trucks without stabilizers of any kind.  However, it was also found that with the ESC, 4,659 fewer crashes and 126 fewer deaths resulted.

Fortunately, members of the public will have the opportunity to comment on the proposal after it has been published in the Federal Register or during public hearings held by the NHTSA, which has yet to be determined.  For those that have a vested interest in the outcome, now is the time to make sure your voice is heard!

Berrier Insurance-Grateful For a Happy Reunion

We are happy this story had a happy ending - Berrier Insurance, commercial truck insurance specialists.

A dog accidentally left at a rest area waited there for two days before his truck-driving owner was able to locate him.

Rambo, an 9-month-old Yorkie, apparently jumped out of Michael Siau's rig when they stopped at a Missouri rest area late last week.

"Didn't even cross my mind that he might jump out—he never has before, I jumped back in the truck, put it in gear and drove off. And I just thought he was in the back asleep." 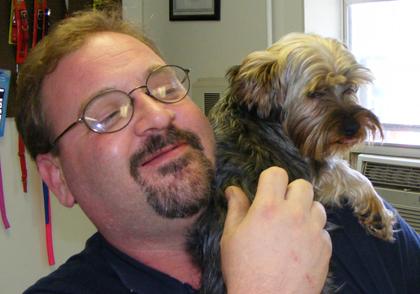 "I was freaking out," said Siau who admits he was sobbing during the ordeal "I had to calm down and think about how he could have possibly gotten out. And it came to me that was the only time that I could have got out and I wouldn't have seen him. I was just sure he was there."

But the Arkansas-based truck driver feared he'd lose his job if he turned around. He called authorities, eventually reaching a local animal control officer who went to the site on Sunday.
"Sure enough, little Rambo was there, sitting patiently." He was taken to an animal shelter in Hannibal until Siau could collect him.

According to the animal control officer, Tim Ledbetter, a family that had stopped at the rest area had offered to adopt Rambo. "In about 60 seconds, he would have been gone," Ledbetter said.
Siau returned Tuesday to pick up Rambo, who "began to whimper, tremble and squirm" when he heard his owner call his name.

Be aware commercial truckers, you may find that you really did need that extra coverage on your commercial truck insurance policy!  With the longer days of summer fun also comes the darkest statistics – the summer months are the most deadly time of year for drivers and passengers. According to a 2010 AAA analysis of crash data by the National Highway Traffic Safety Administration, seven of the top ten deadliest driving days of the year occur between Memorial Day and Labor Day.  With  July 2, 3 and 4 being the most dangerous days in America to drive with more fatalities in this 72-hour period than any other three-day block all year. Professional drivers, please use extra caution with so many travelers joining you on the roads this week. Thank you for driving safely 24/7!  To find out how well you are covered, give Berrier Insurance a call! 888-472-4915
Posted by Lisa Sherer - Berrier Insurance at 2:43 PM No comments: