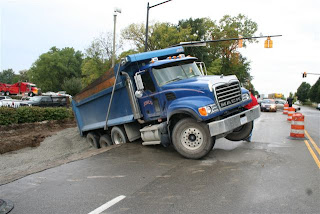 If ever there was an example of a dump truck owner needing top quality commercial trucking insurance, it comes in a recent sentencing of a Wisconsin man named Michael Frambs. Frambs, a resident of the small Northern Wisconsin town of Eau Claire, stole a dump truck in June of last year and took it on a parade of destruction in the front yards of the residential suburb Lake Hallie, slamming it into two houses and three parked cars at 11:00pm while the families were occupying their homes. Not only that, but an Eau Claire police officer had to physically jump into the dump truck passenger door to stop Frambs from causing any more damage. Initially, Frambs tried to push the officer out of the truck, but he was eventually overpowered and cruised to a stop.
All of this racked up 18 different charges to the Wisconsin man, but after cooperation with the law, plea bargaining and given the fact he had no prior record, a judge sentenced him to a mere 360 days of jail time, some of which was served awaiting his trial, and seven years probation. Frambs, a young man at the age of 24, was also required by law to pay back $90,000 in damages for his dump truck rampage. It is speculated that he will be released from jail before his sentence is served because of good behavior and cooperation.

A good commercial truck insurance policy would likely pay for all of the damages that Frambs or any other delinquent might have caused with the truck. Luckily, the damages in this case amounted to a truck insurance payout of less than $100,000, which is more than the average damage amount associated with a truck insurance claim. The damages could have been infinitely worse, as a dump truck has the power to crush through entire houses, and certainly could have injured or killed anyone in its path.

Lucky for Frambs that Wisconsin residents are so forgiving and understanding, as many neighbors who were affected by the dump truck rampage told Wisconsin’s WEAU news that they were okay with the compassionate sentence since no one was injured in this particular instance. “I think it’s probably fair,” said neighbor Becky Van Nortrick to the WEAU news team. “I mean, hopefully he’s learned a valuable lesson on this.”
Make sure you have the right truck insurance coverage at the right price. Call Berrier Insurance today 800-750-1812.
Posted by Lisa Sherer - Berrier Insurance at 5:28 PM